I was working with a guitar player recently who played a really bad note. I mean, REALLY bad. Like, there was no chance of coming back from it; it was one of those moments where every single person in the entire theater had their eyes on this one instrument and he dropped the ball. Big time.

I’m not picking on him, it happens. And if we’re being honest here, this has happened to all of us at one time or another. We played a goofy note so bad, so wrong, so off, so out of time, out of tune, or out of this world that there was no justifying it. There was no way to shake it off, ignore it or pretend that it was something else.

I’ll never forget one December concert in 2005 when it happened to me. We (the CSUN Symphony Orchestra) were premiering an atonal composition entitled The Death of Socrates. If you’re unfamiliar with atonal music, do a brief Google search and then come back 🙂 I’ll wait here.

So this piece is all over the place; tempo/meter/key/dynamic changes every bar or so… It was insane, but in a very artistic way it portrayed (aurally) the trial, conviction and sentencing of Socrates’ death. It was a very cool piece to play and very avant-garde and very difficult.

So we had been working on it a few weeks and the composer came to visit one day and guest conduct. Along with her she brought 90 or so students from the local high school coming to check out the music department at our university. She instructed the students to gather around the sections of the instruments that they play to get some real-world experience of sitting with a “professional” section.

So there I am surrounded by a few hundred people – fellow students, younger bass players and colleagues; perhaps just over 200 of us in total. 200 musicians, that is. We begin playing through the piece (it’s about 10 minutes in length) and all is well, so far. Granted, it probably sounded as good as Gilbert Gottfried singing Vanilla Ice’s Ice Ice Baby accompanied by fingernails scratching a chalkboard, but that’s how it was supposed to sound.

Now here’s where it gets interesting: After all is said and done (if you’re unaware of his manner of execution) Socrates ingests poison. This composer cleverly interpreted his death on the music staff as each measure getting slower and slower, bpm by bpm. You would see quarter note = 90 for one bar, then quarter note = 84 for another bar or so, then 70, 63, 58 and so on, until we were playing a single, almost silent pulsing heartbeat on an open fifth chord that got slower and slower until it stopped altogether.

A very artistic expression I must admit. Anyways, by now you have to be wondering why I’m telling this story to begin with. I’m getting there.

The piece ends, everyone is on the edge of their seat (all 200 of us) and the silence is deafening after the 10 minutes of chaos that everyone just heard. Have I ever mentioned that every once in a while I get a nervous twitch? Not from being nervous – I mean that my nerves will jolt me and cause my limbs to convulse briefly. And guess what happened in this silence after a perfect ending?

All of a sudden, after Socrates’ whispering heart beat it’s last, my bow violently scratched my D String, causing a sound not too dissimilar from a tire-squealing from a sudden, forced-stop. And that’s when 398 eyeballs feverishly searched for the culprit and instantly found me. The other two eyes (mine) were glued open like a deer staring into oncoming headlights and glazed over with disbelief as my conductor proceeded to set me ablaze with a fury of disappointment.

Now, as terrified and humiliated as I was in that moment, I came to a realization; I’ll never make this mistake again. And I haven’t. On the night that we performed The Death of Socrates, I didn’t even play the last four measures. I faked it. There was NO WAY that I would accidentally strike my death-strings in such delicate silence ever again and I didn’t even want to risk it. And what’s funny is that this event has haunted me to this very day every time I perform. When I’m playing a tune that has no bass part for 4, 8 or 16 bars, I mute my guitar; I do so by rolling off my volume knob, pushing my volume pedal all the way down AND engaging my mute button/killswitch pedal. Never again. If I’m supposed to be silent then silence is what you will hear. I won’t ever ‘ruin the moment’ again because of a silly, unpredictable hiccup.

Now, maybe I’ve gone a little overboard with this, but the sentiment remains the same. As I told my guitar-player friend a few weeks ago (remember him from the beginning of this story?), “Don’t worry about it. Some mistakes are so bad that you’ll only do them once.”

Rest assured that when you’ve goofed up SO BAD that there’s no way out, at least you can take solace in the fact that you’ve done so for the last time. Fear not that you’ll every make such a mistake again! For the nightmare of having done so will haunt you until the end of your days.

Come to think of it, perhaps I should have ended on a happier note. Let’s try this:

Think of these horrific mistakes as Bucket List items that you get to check off your list of things never ever ever to do but you did anyways.

There. Attitude is everything 🙂 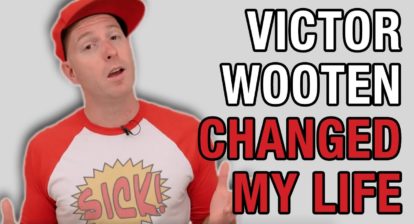