In the modern era of streaming, cell phones, social media and the vastness of the internet at our fingertips, it seems that the future of the music industry is quite bleak. Although it is (in many ways) harder to be a professional musician these days, it’s also never been easier, due to some of the same factors. Let me explain:

I can count on one hand the amount of times that I’ve had to go to a “real” studio this year. I do most recordings these days from my home – no travel time, Los Angeles traffic or parking stress – I even did an entire record with an Australian rock back from my bedroom. They were in Australia the whole time. Skype to the rescue!

I can look at the Google Analytics for my YouTube channel and see where most of my viewers are located, and rather than guessing where I should tour I can tell you the exact cities that would want to see me come play there. I can ask my fans – personally – what they want to see or hear from me and choose to cater that way or not.

There’s no need to guess anymore.

Of course that kind of convenience comes at a steep cost. It’s cheaper to make records these days and record sales are becoming increasingly nonexistent. Sounds like the end of the world for us musicians. But actually, this just means that you need to have a new product to sell. The music is no longer your commodity (I argue that it never should have been), but rather it is your vehicle to get your audience to whatever it is that you are selling. I personally use music to sell my knowledge and experience via teaching.

We have an audience that finds us through our music (that part hasn’t changed through the decades) but nowadays we need to create new products for them to purchase from us (a making-of documentary, limited run vinyl, t-shirts, exclusive content, etc.).

Also keep in mind that time is a big factor too. Yes, with Pro Tools and auto-tuning and quantizing, it’s possible for anyone to make anything sound good (not really, but really). But that kind of editing takes time. I was doing a session last month where no one in the room had worked with real studio musicians before – they just spent hours editing and chopping whatever they got from whomever was playing. After drummer and I finished a song on our first play-through, they looked at each other in disbelief because they realized the song was done. We had saved them hours in the editing process and I’m positive they’ll be calling one or both of us back again. The ability to do something quickly will always put you ahead of the others.

Sure, the days of being a session musician are all but over; days where players could do one thing and one thing only (play their instrument) and make an honest living with it… But at the same time, that sacrifice comes with the trade off that allows more people to participate (I could never have had this kind of career 20 years ago) and also widens our audience and market – the fact that I can talk to someone in Germany about our mutual passion is surreal to me.

So while the world of professional music is much different today than it has been in the past, I’d also argue that it’s a much better model than it’s ever been. What do you think? 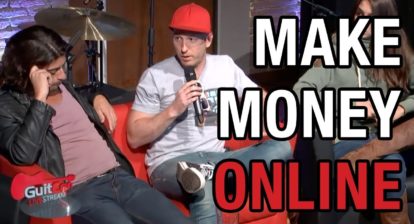