I received this question from an awesome bass player named Matt Lawton (http://www.mattlawtonbass.blogspot.com) a few weeks back and I thought it was a terrific topic to discuss. In his email he inquired:

“I would be interested to know how much time you spend actually practicing your bass and working on stuff that YOU want to work on, as unfortunately this is the task that normally gets pushed to the bottom of my list…”

I’m going to elaborate a little bit on the response that I sent him. In essence, the real answer to this question is quite simple. How much time do I spend practicing my bass and working on stuff that I want to work on?

I know it’s cliché, but it’s entirely true. I don’t feel that I really put as much time into practicing as I should, and hopefully you do too. The moment we say, “Okay, that’s good enough,” is the moment that we stop progressing and moving forward. I’m still far away from where I want to be as a musician, a composer, a producer, an educator, a businessman, and a bass player… That keeps me motivated, in a way, to keep striving for the best. It keeps me moving forward. Now, I’m not saying this as a cop-out and, true, it is a very Cookie-Cutter answer; but I stand by it. I don’t put in nearly enough time as I should, and my reason for doing so is probably the same as yours: I have very little time for it!

To be honest, although on a daily basis I am playing bass quite often (either at a gig, rehearsal, recording, writing, or teaching), I actually have very little time for practicing. I love it when a Friday or Saturday rolls around and I don’t have anything of the “working” sort and I have an afternoon to practice what I want to do, but those days are pretty few and far between. I mean, let’s be honest. My day isn’t any less busy than yours. I have a career and a home life that I try to balance at a healthy equilibrium, and unfortunately my passion for music falls under both categories. Sometimes it’s work and sometimes it’s play (but more than often it’s work). And when you get home from work what do you want to do? Go practice all night? Not me. I like to kick my feet up on the stack of bills resting on my coffee table and fall asleep to Netflix with my wife.

So to balance this out I try to practice on the job. It makes perfect sense; in whatever it is that I’m doing I try to find some sort of challenge, because that’s truly what practice is. If it’s easy for you then you’re not progressing, you’re staying where you’re comfortable. For instance, last night I played at a bar with my brother for about 3 hours doing all cover tunes. So while the repertoire isn’t too difficult I make a point to spice it up with things that I’m interested in learning. On a tune like Sweet Home Alabama I might try to tap the bass notes with my left hand and do something percussive or harmonic with my right. While my brother solos I might practice tossing in open harmonics to fill in the chord. I might try to play a bass solo outside of the key on an easy I-IV groove like Miss You. Sometimes I like to hit “wrong” notes and try to make them sound “right.” I might perform a song using difficult and un-natural fingerings and shifts to practice moving around the instrument in a different way. Sometimes I spell out each chord (in my head) as I play the root note. Or I might take a song with multiple guitar parts and try to work them into my bass part (only when I’m playing as a duo with my brother, obviously. Don’t make your guitar players mad!). I especially like to see how many songs I can play at once; we’ll be singing Come Together by the Beatles and I’ll work in Flea’s bass line to Give it Away Now by the Red Hot Chili Peppers, or I’ll play the melody to Take on Me over Billy Idol’s Rebel Yell (this one is a bit of a stretch but it works!).

If it’s easy, find a way to make it hard! Now you’re having fun and practicing at the same time. So, more often than not that’s my solution: work your practice into your gig and you not only get the time to actually practice, you also get paid for it 🙂

Obviously this does not replace the time I spend in the practice room “shedding” as they say, but it’s a good way to keep things fresh and make sure you’re moving forward in your musicianship on a regular basis. 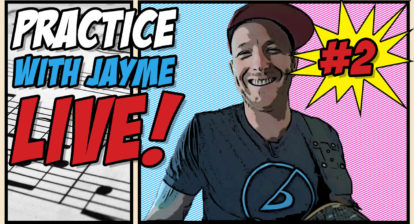